A favorite Christmas memory was having Christmas breakfast at my parent's house, my childhood home. My parents would have pancakes with bacon and sausage and fresh orange juice. The tables were set up in the garage.

My mother with our daughter and son. 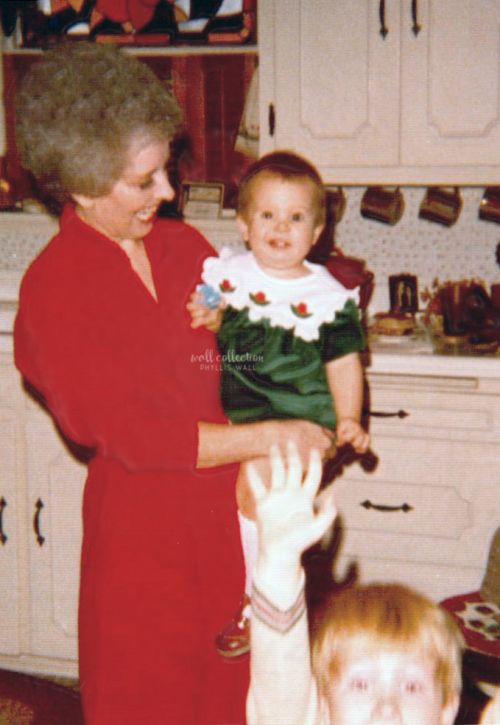 A Lesson in the Pot

So, Sunday, I was cooking some pasta, and I noticed that when I stirred the pot, the pasta was all over the surface, but once I stopped, it came huddled back together again. So, I thought, okay, there is a lesson in the pot!

Life happens, and as Believers, we are often spread thin, but when the pot-stirring stops, we regroup. In these times, we go from hard to tender through our personal relationship with Christ and find ourselves digging deeper into the beautiful gift of the Holy Word!

Be a pot-stirrer who delivers kindness, encouragement; always giving grace (not the nego kind). 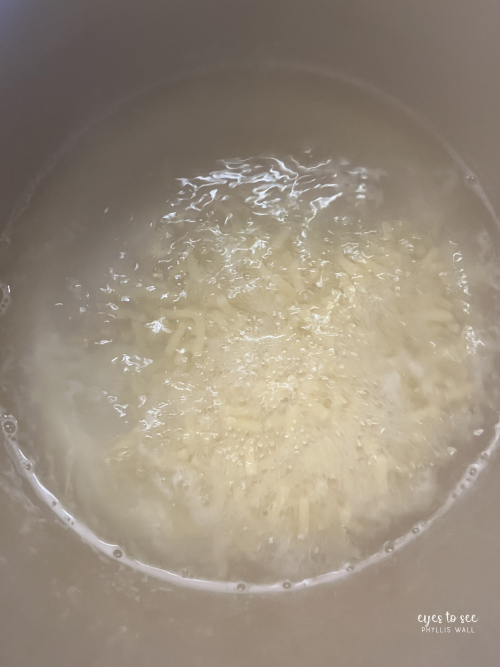 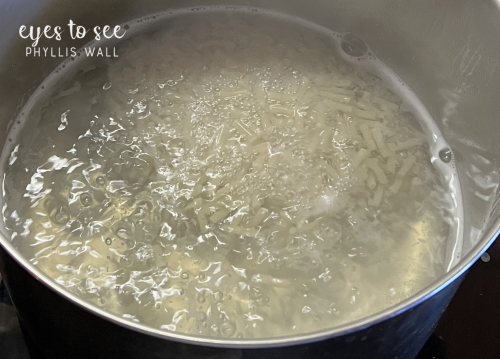 Hebrews 10:24-25, And let us consider how to stir up one another to love and good works, not neglecting to meet together, as is the habit of some, but encouraging one another, and all the more as you see the Day drawing near.

As a teen, I learned this song. Since that time, it has been embedded in my spirit. Before overnight TV, when our babies were little, I sang this song to them as I rocked them and loved on them. 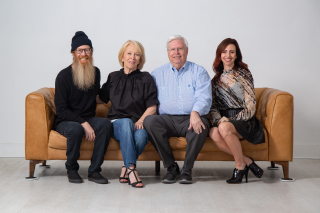 'Tis the Season to pass it on! Proverbs 11:25, A generous person will prosper; whoever refreshes others will be refreshed.

The moon was so prominent in the sky as the sunset began this evening. It got smaller and smaller as the dark set around us. It is a beautiful full moon! Go look. Here a train passes ... 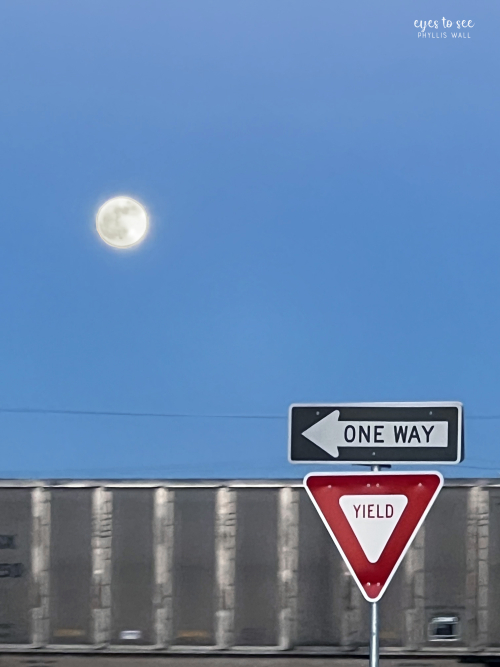 But, if you are curious about the 'basic' things to identify one who is possibly on the spectrum, then here are seven identifiers:

Hi, I'm Phyllis, and this is the face of Asperger's.

God has blessed us with five grandchildren. They are God's, and it is my prayer that they grow up knowing their Creator in a profound and meaningful way. They bring us great joy! 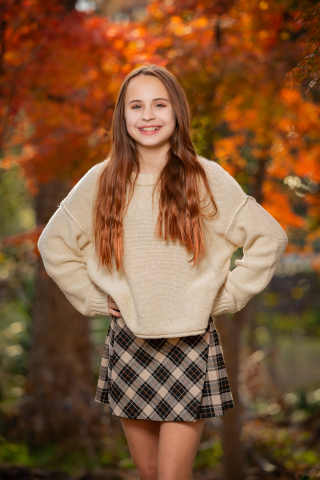 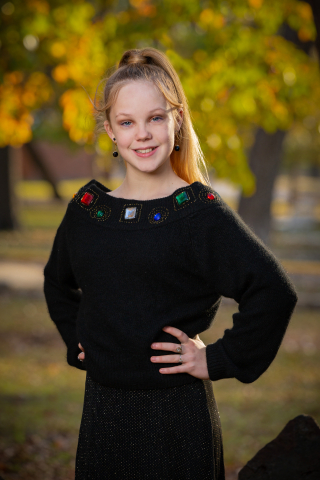 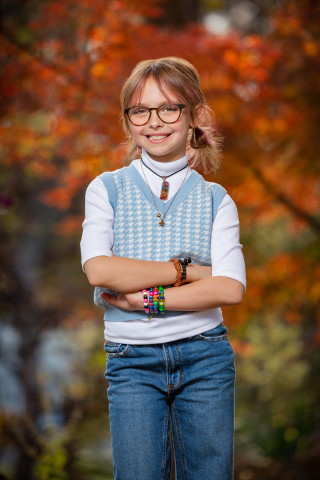 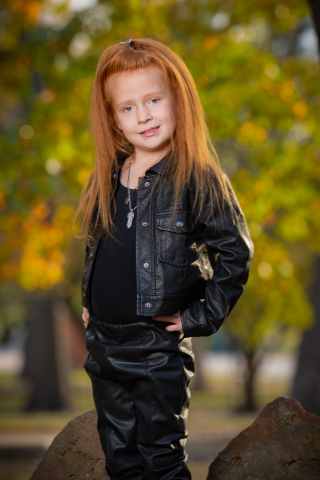 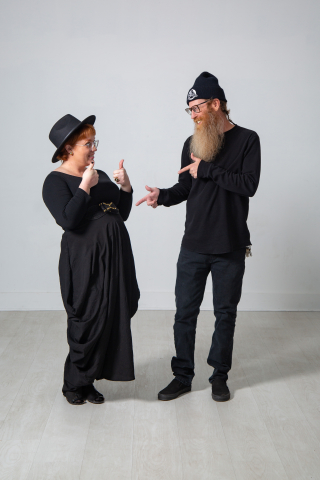 Today I took some time to visit our Salvation Army Store. I was specifically looking for nothing in particular. Instead, I found three unique treasures; one is a super good find! Love Story by Erich Segal, the 1970 edition in excellent condition. Who read this book or saw the movie back in the day? I watched the movie, and I am excited to read the book 51 years later!!! 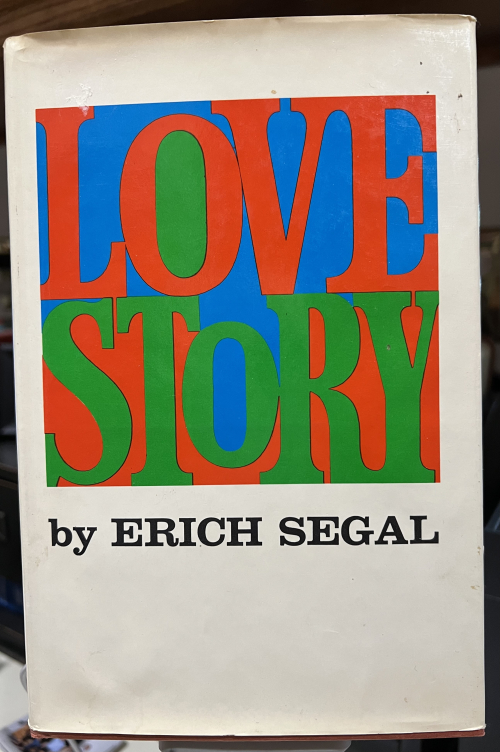 Here is the deal. I process things differently than you. I want to be like you in many ways, but I'm simply not. Each day, I hang on a thread between mentally making it or falling into an unbalanced mental state. It is very hard work. I don't want you to feel sorry for me because I know that I'm not alone in this type of journey. I'm actually blessed through the one who created me with exceptionality, God my Father.

I live in a very protected world. I surround myself with people who bring me joy. I shy away from those that find me difficult to love to protect them. I never want to cause anyone pain. I love deeply. I search to find the good in all people, whether they see it in me or not.

Galatians 2:20, I have been crucified with Christ. It is no longer I who live, but Christ who lives in me. And the life I now live in the flesh I live by faith in the Son of God, who loved me and gave himself for me. I hang my life here. This is my hope.

The Asperger's struggle is real. But, the Prince of Peace allows me to overcome the struggles of life. It may not be as quick as the twitch of the nose like in the television show of the 70s, Bewitched, but He is everpresent as he carries me, walks with me, and allows the fullness of life regardless of the struggles.

We must remember that the holiday seasons throughout the year are emotionally draining for many. Let's lift our friends up in prayer asking for a peace-filled Christmas Season for them and those they love so deeply. 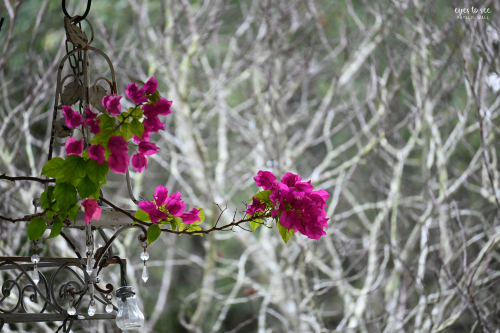 Of the greatness of his government and peace
there will be no end.
He will reign on David's throne
and over his kingdom,
establishing and upholding it
with justice and righteousness
from that time on and forever.
The zeal of the Lord Almighty
will accomplish this. Isaiah 9:7

Righteousness is right standing with God. We are not made righteous by what we do. Righteousness is a gift that comes from the Lord to those who accept what Jesus has done for them by faith (Romans 5:17-18). Through this, justice simply is. Justice is behaving according to what is morally right and fair for everyone. We can't be righteous or show justice without God within us. God was, is, and will be the creator of humanity. Believe it or don't, but we need His Word alive breathed into us to live. Live it or don't, the same, different end result...a very broken world. We scream justice and righteousness instead of allowing Jesus to radiate through us in love and service to each other. Be beautifully His in this crazy world. After all, He will accomplish what he set in place long ago for this very day. Believe. Peace. Merry Christmas!!! 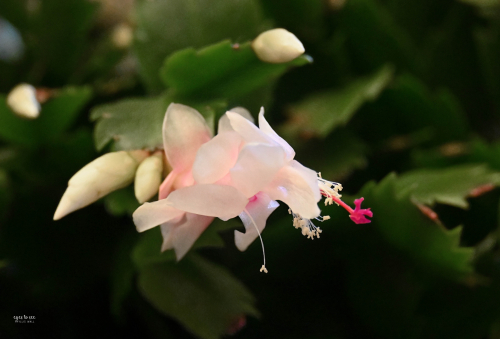 On Friday, December tenth, we headed to the DFW area to celebrate a grand's 13th birthday. It is typically a pretty easy drive that takes about four and a half to five hours. However, this trip had a surprise in store.

If you remember, the day was windy. I usually drive to Vernon, and Clinton drives to the kid's house. We had just changed drivers, thank goodness! Unfortunately, we came upon a massive 0% controlled fire in Electra.

At about Harrold, we were directed by officers to exit 287. From there, you were on your own; they were a bit busy. So we decided to drive to Burkburnett, where the Wall grandparents lived, and then travel towards getting back on 287 at Wichita Falls.

Just outside Wichita Falls, we sat in both lanes full of traffic as we watched the fire off to our right. 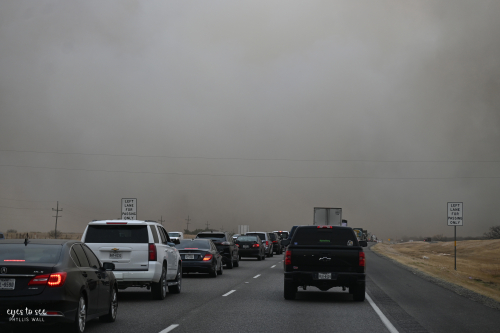 I rolled down the window to take a picture and began to feel the heat. I have to admit that I was a bit freaked out. 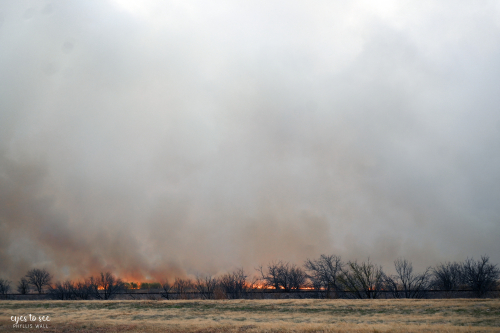 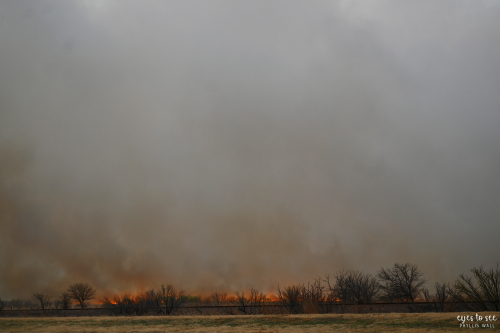 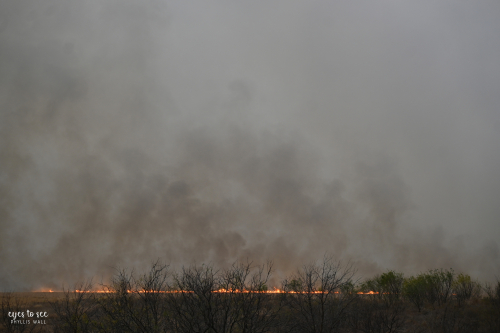 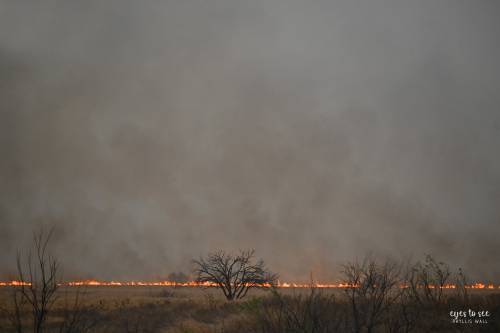 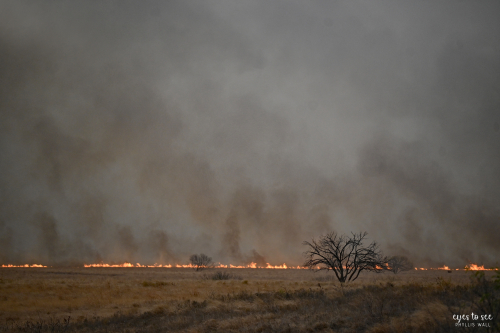 Just past Jolly, we were, again, directed off of 287. There are not many straight roads, so we ended up following, bumper to bumper, the long line to Petrolia. In Petrolia, there was another re-direct that led us to Waurika. The sad thing is we drove right by Bill's Fish House and did not get to stop! What a shame!!! From Waurika, we took Highway 70 to Ardmore and came back down I35 to the kid's house. The trip was a few hours longer than we expected.

What we did not know at the time was that the fire had jumped 287 and was headed towards Petrolia, where we were all sitting ducks in a long line. We made the right choices, though!

The drive was long, and the sky was smoke-filled but, God protected and blessed us.

The sky was amazing! 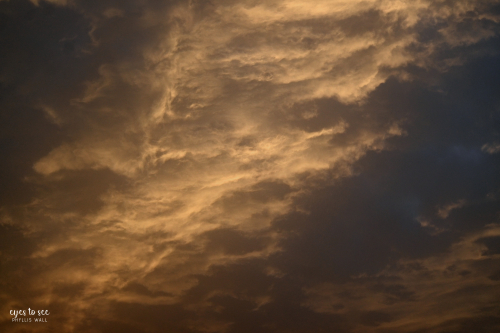 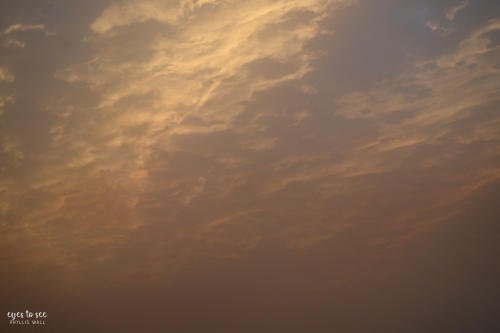 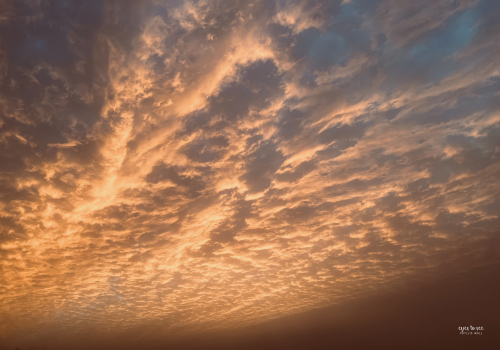 Here is our locations map and the red fire area. 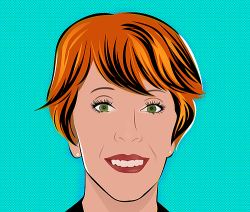